Home » A PREGNANT M.I.A TO PERFORM AT GRAMMY’S ON HER DUE DATE

A PREGNANT M.I.A TO PERFORM AT GRAMMY’S ON HER DUE DATE 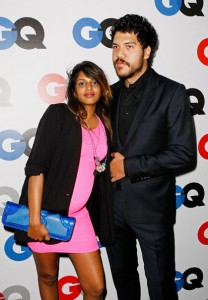 A pregnant and rather brave M.I.A. a.k.a. Maya Arulpragasam is set to perform at the Grammy’s this Sunday, which also happens to be her baby’s due date. She tells USAToday, “They say that you’re often late the first time, so I’m planning to go” to the show, says M.I.A., 31, who’s engaged to musician Ben Bronfman (aka Benjamin Brewer of the now-disbanded The Exit). “We’ll see. People are trying to get me to relax and focus on the baby. It’s like being in parallel universes.”

M.I.A. is looking forward to motherhood and says, “Having a baby is the most creative thing you can do,” she says. “It makes you re-learn the world through a child’s eyes.”

M.I.A. is up for two Grammys: record of the year for Paper Planes and best rap song for Swagga Like Us.

A COLORFUL MOM AND SON PAIR:HARVEY AND KATIE