Home » BOBBY BROWN:CLEAN AND SOBER AND READY FOR BABY #5 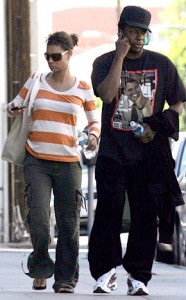 In case you didn’t believe the news when  Blackcelebkids.com announced it several days ago, Bobby Brown and his girlfriend Alicia Etheridge have confirmed to various news sources that they are indeed expecting a baby together. Bobby’s representative Ravi Dabiesingh  confirms, “Yes, Bobby is expecting his fifth child from Alicia. There aren’t too many details out there right now, but we do know he is very excited, as Bobby is big on family. The sex of the baby is not known yet, and we can confirm she is four months along.”

Bobby himself says that he is “really excited about [his] new addition to [his] family.”

Bobby plans to celebrate his 40th birthday and sobriety with family and friends on Thursday in Los Angeles. In all, Bobby has five children:15-year-old daughter Bobbi Kristina with singer Whitney Houston. He also has two children with ex-girlfriend Kim Ward and a son with ex-girlfriend Melika Williams. This will be Etheridge’s first child.

NEWS: A LIFE OF CRIME FOR BOYS WITH UNPOPULAR NAMES?