Home » NEWS » NEWS: TEEN BIRTH RATES ARE ON THE RISE IN 26 STATES

NEWS: TEEN BIRTH RATES ARE ON THE RISE IN 26 STATES 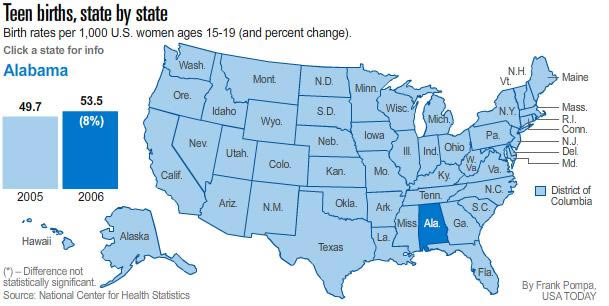 The federal data — largely from birth certificates — shows widespread statistically significant increases for 2006, the most recent year for which data are available. In the two previous years — from 2004 to 2005 and from 2003 to 2004 — only one state in each year (Tennessee and South Dakota) had a significant increase.

“It occurred among teens 15-17 and 18-19 and among whites, blacks and Hispanics, and now we know it occurred in most of the states,” says Moore, who has tracked teen births for 30 years. “It appears to be quite a general pattern, which makes me think it might not be a blip but a turn-around.”

SASHA AND MALIA ARE DOLLS

KEKE PALMER:OBAMA'S WIN IS SPECIAL TO ME

KEKE PALMER:OBAMA'S WIN IS SPECIAL TO ME