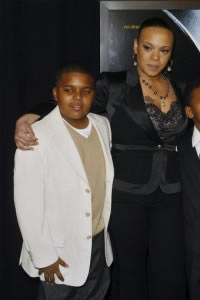 12 year-old CJ Wallace, the son of the late Notorious BIG, has been receiving great reviews for his portrayal of his father in movie Notorious.  Although CJ has been having a lot fun, he says that “it’s still work.”   CJ’s Mom, singer Faith Evans, concurs with her son and tells him “You want fame? fame costs”.

Faith adds, “If it wasn’t for this project being the project it was, I wouldn’t have pulled him out of school,” she said. “He thinks he’s interested [in being a performer], then every time he remembers that tutor he had on set, he goes back to reality. He’s like, ‘I don’t know.’ It’s fun, but it’s still work.”

In addition to the movie Notorious, CJ also CJ is  appears on the film’s soundtrack, rapping alongside his dad on a remix of “One More Chance.”