MALIA AND SASHA OBAMA’S FIRST DAY OF SCHOOL AT SIDWELL 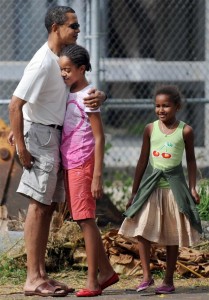 First-Kids-to-be, Malia and Sasha Obama, started their first day of school at Sidwell Friends in upper Northwest Washington and Bethesda today. As told by Debbi Wilgoren of the Washington Post:

Malia, 10, and Sasha, 7, left the Hay-Adams Hotel with their mother Michelle Obama at 7:10 a.m. Their motorcade emerged from a security tent that has been erected outside the posh hotel, and they drove off with nary a wave to the throngs of cameras or the waiting crowds. Malia, a fifth-grader, arrived at Sidwell’s middle school in the 3800 block of Wisconsin Avenue at 7:30 a.m., a full half-hour before the school day began. …The youngest Obama had had a little more time than her sister to yawn away the Hawaii jet lag and Chicago time change. Sidwell’s lower school, located a few miles away on Edgemoor Lane in Bethesda, doesn’t ring the opening bell until 8:30. The Obamas arrived at 8 a.m., again plenty early, and the motorcade again used a side garage entrance, away from the rest of the drop-off crowd.
Source

IT'S A BABY BOY FOR ACTRESS LISA BONET